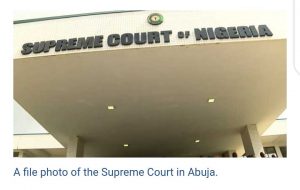 Afrinity Production disclose to you the Nigeria’s 36 states of the Federation action on Monday by taking the Federal Government to the Supreme Court and also challenging the presidential executive order signed in May by President Muhammadu Buhari.

The states are seeking an order of the Supreme Court to quash President Buhari’s executive order on the funding of courts, which he signed on May 20.

They are contending that the order is a clear violation of sections 6 and 8(3) of the 1999 constitution, which makes it the responsibility of the federal government to fund the listed courts.

The 36 states, while claiming that they had been funding the capital projects in the listed courts since 2009, are also asking the Supreme Court to order the Nigeria Federal Government to make a refund to them.