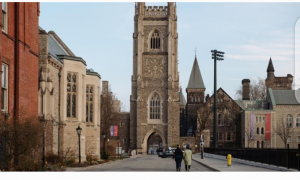 Afrinity Production unveil the action ongoing in University of Toronto’s law school, which allegedly blocks hiring of scholar due to her work on Israel’s human rights abuses.

According to our source, students and teachers at the University of Toronto have already called for the reinstatement of an international scholar’s job offer after it was allegedly rescinded by management over her work on Israel’s human rights abuses in the occupied Palestinian territories.

Aljazeera said, the university’s law school has been accused of blocking the hiring of Valentina Azarova as director of the International Human Rights Program (IHRP) following pressure by a sitting federal judge, who is also a major donor to the faculty, according to emails seen by the Toronto Star newspaper.

In an email sent to law school Dean Edward Iacobucci on September 12, also seen by Canadian daily The Globe and Mail, two former directors of the IHRP programme said the school made an offer to Azarova that she accepted in August.

However, when a judge in the Tax Court of Canada, whose name has not been disclosed, expressed concerns about Azarova, Iacobucci rescinded the offer, media reports said on Thursday.

The decision led to a series of resignations at the university, including law professor Audrey Macklin, who chaired the hiring committee that unanimously found Azarova to be the best candidate for the position. On Thursday, a second member of the committee, Vincent Wong, resigned.