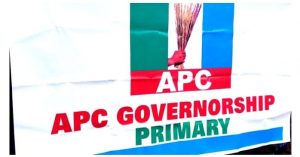 The All Progressives Congress (APC) is conducting its primary election for the forthcoming governorship poll in Edo State.

This is meant to pick the party’s flagbearer in the September 19, it is ongoing across the 192 wards of the 18 local government areas of the state.

Party officials and delegates arrived early for the exercise at the APC secretariat in Ward 7, Oredo LGA in Benin City, the state capital.

The Ward Chairman, Osamudiame Osarenkhoe, said the party is conducting the exercise in line with the guidelines against coronavirus (COIVD-19).

According to him, the party has provided a bucket for the washing of hands while delegates participating in the exercise were compelled to wear face masks.

Elsewhere, APC members in Ward 3, Auchi in Etsako-West LGA also stormed the venue of the exercise to vote in the primaries.

But the exercise had not commenced as of 9:30am as the Independent National Electoral Commission (INEC) observer was yet to arrive at the venue.