Australian singer of feminist anthem “I Am Woman” dies at 78. 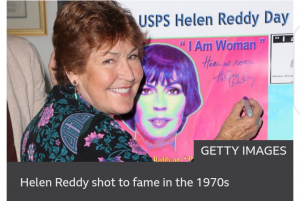 Afrinity Production dicloses the sudden demise of Helen Reddy, the Australian singer behind feminist anthem I Am Woman.

Reddy died on Tuesday in Los Angeles, her family said in a statement on Facebook.

Her children Traci Donat and Jordan Sommers described her as a “wonderful mother, grandmother, and a truly formidable woman”.
“Our hearts are broken. But we take comfort in the knowledge that her voice will live on forever.”

Reddy, who had Addison’s disease and was diagnosed with dementia in 2015, spent the last years of her life in a celebrity care home in Los Angeles.

She had a string of pop-rock hits in the 1970s, but is best known for the 1972 anthem I Am Woman – which became prominent in the women’s liberation movement.

Posted in Featured News | Comments Off on Australian singer of feminist anthem “I Am Woman” dies at 78.