Bollywood bets on the small screen as Covid shuts cinemas 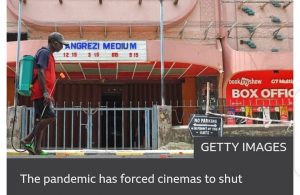 Afrinity Production came to about the unusual summer in India. Its movie-obsessed millions have had to do without trips to the beloved cinema ever since theatres closed in March because of the coronavirus pandemic.

But there’s been some relief for families cooped up indoors as streaming platforms stepped up to fill the void.

A slew of films have already skipped theatrical releases to slash losses and, instead, hit the small screen. More and more A-list actors are now willing to embrace roles on originals by Netflix, Amazon’s Prime Video and Disney+ Hotstar. And the pandemic, to the growing frustration of cinema owners, has hastened a process that was already underway – the shrinking gap between the small and big screen in India.

The result: Bollywood, according to film journalist Aseem Chhabra, “has had to scramble, adjust and, in some cases, compromise.”

In June, the first film to release online was Gulabo Sitabo, a quirky satire steered by one of Bollywood’s biggest stars, Amitabh Bachchan. Then came Shakuntala Devi, a much-anticipated biopic on an Indian math wizard; Gunjan Saxena, a film inspired by India’s first female pilot; and Sadak 2, a highly awaited sequel to a 1991 thriller.

For these cinema-bound movies, streaming platforms weren’t just the only option – they were the obvious choice.

Known for subversive and edgy content that film censor boards would balk at, streaming platforms had already built a strong belt of young and urban viewers, many of whom question Bollywood’s musical spectacles or tired tropes.

Partial COVID-19 Lockdown In Madrid As US Deaths Near 200,000 (Previous Post)
(Next Post) Parliament vote for or against Constitution Promulgation Bill 2020
Previous Image