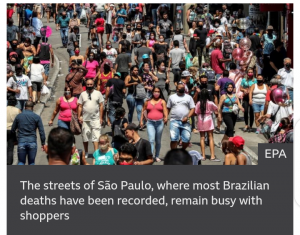 Afrinity Production make known to you the confirmed cases of coronavirus in Brazil which have passed five million, with deaths in the country approaching 150,000, officials say.

The country is the third worst hit for infections, after the US and India.

President Jair Bolsonaro has been accused of downplaying the risks of the virus throughout the pandemic, ignoring expert advice on restrictive measures.

Mr Bolsonaro has rejected criticism of his handling of the pandemic, but his decision to oppose lockdowns and focus on the economy has been hugely divisive.

Brazil has the highest number of deaths in Latin America.

Know More About The First Female President Of The University of the Gambia. (Previous Post)
(Next Post) Thousands protest against Indonesia’s law on jobs
Previous Image