Coronavirus: Tenerife hotel with hundreds of guests locked down

Coronavirus: Tenerife hotel with hundreds of guests locked down 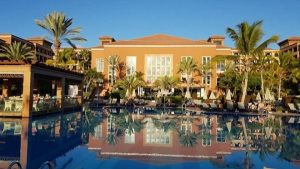 A hotel in Tenerife in Spain’s Canary Islands has been locked down after a visiting Italian doctor tested positive for coronavirus.

Hundreds of guests at the H10 Costa Adeje Palace Hotel were initially told to stay in their rooms as medical tests were carried out, Spanish media report.

The doctor is reportedly from the Lombardy region, where Italian authorities are battling an outbreak.

Global cases of the virus have passed 80,000, the vast majority in China.

Iran, one of the worst-affected nations outside China, on Tuesday said its deputy health minister, Iraj Harirchi, had tested positive for the virus.

The World Health Organization (WHO) said on Monday the world should do more to prepare for a possible pandemic – a situation where an infectious disease spreads easily between people in many countries.

The proportion of infected people who die appears to be between 1% and 2%, although the WHO cautions that the precise mortality rate is not known yet.

What’s the latest from the hotel in Tenerife?

Agence France-Presse quoted a health authority spokeswoman, Veronica Martin, as saying that guests at the four-star hotel in the south-west of the island were being monitored for “health reasons and the degree of supervision will be assessed during the day, but so far, we’re not talking about quarantine”.

One guest posted on Facebook an image of a note put under the door of their room on Tuesday saying: “We regret to inform you that for health reasons, the hotel has been closed down. Until the sanitary authorities warn, you must remain in your rooms.”

Another guest, John Turton, told the BBC he and his wife had seen the note but then heard people walking outside and heading to breakfast.

He said: “The hotel has been cordoned off but we’re trying to make the best of what’s going on. We haven’t been given any more information other than the note but we’re going to just wait, try and enjoy the holiday and see what happens.”

People were now walking around the hotel and using sun loungers, he said, but the police cordon was preventing people from leaving.

Mr Turton said he had not yet been tested.

The Italian doctor, who had been staying at the hotel with his wife, tested positive on Monday and has been placed in isolation at the University Hospital Nuestra Señora de Candelaria. He will undergo a second test to confirm the virus.

Previously, Spain had had two confirmed cases, both tourists – one German and one British.

What’s happening with the virus globally?

On Tuesday, a plane carrying more than 130 passengers and crew from the Iranian capital, Tehran, to Istanbul was diverted to the Turkish capital, Ankara, amid suspicion of infections on board. Turkey’s health minister said all would be quarantined for 14 days.

Italy is badly affected, with the largest number of cases in Europe – 231. Seven people have died.

It announced a series of drastic measures over the weekend to try to contain the outbreak. The regions of Lombardy and Veneto have locked down several small towns. For the next two weeks, 50,000 residents will not be able to leave without special permission.

However, there are signs the virus is spreading, with new cases reported on Tuesday in Tuscany and Sicily.

China, the source of the outbreak, still has by far the largest number of infections – more than 77,000 – and deaths, 2,663. The bulk of the cases are in the city of Wuhan.

South Korea’s infections rose to 977 on Tuesday, with 10 deaths. Americans have been warned against all but essential travel to the nation.

The US plans to spend $2.5bn (£1.93bn) fighting the coronavirus, with funds for quarantine, vaccine research and aiding affected states, US media reported. There are 53 cases in the country so far.

Japanese media reported that a fourth passenger on the quarantined Diamond Princess cruise liner had died. The country has confirmed more than 850 people are infected, most of them on the liner.

Gulf states, including the UAE and Bahrain, have imposed more flight restrictions in an effort to try to slow the spread of the virus.

And the coronavirus outbreak has continued to hit shares, with Japan’s markets slumping in the wake of big falls in London and New York.

Posted in Featured News | Comments Off on Coronavirus: Tenerife hotel with hundreds of guests locked down
Tags: China News