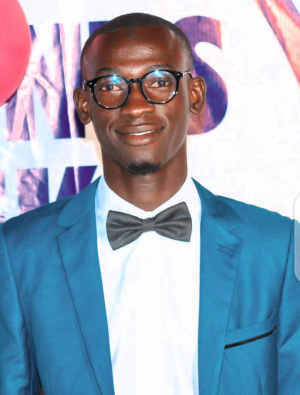 Afrinity Production draw attention to Dawda Cham, born and raised in Jarra Soma in the Lower River Region of The Gambia. He graduated from Nusrat Senior School in 2016 and now a final year Biology Major at the University of The Gambia.

Cham is into youth activism, environmental advocacy and actions, student leadership and also into poetry.

Dawda was actually born to a less privileged family and has not been fortunate to live together with his parents for a longer period of time as he lost his parents between the age of 3 and 12.

Growing up like that was really hard for Dawda. Fortunately for him, he had a very supportive and relentless grandma who is also late but supported him to get through all the hurdles and odds of life at that tender age.

Dawda’s primary school journey was smooth and interesting but as he transcend to other levels of education, things became a little hectic because of some financial constraints but through support from relatives and friends, he was able to sail smoothly until he got to University through the Gambia Government Scholarship.

Volunteerism has been something he grew up with from primary school days. He has always been that student who likes to take up responsibilities to make a change and always wants to make other people feel good.

Through his active participation in school activities and community initiatives, he got lots of connections and exposure to many things. It was one of the workshops he attended on “Environmental Sanitation and Sustainability” that, he built interest in environmental advocacy and climate action after learning that climate change has become a threat to the future of our planet. Since that day, he has been working tirelessly to ensuring that the environment are protected.

“Knowing that my country suffers from some serious environmental problems such as indiscriminate littering in the streets, street urination, poor drainage systems etc. and efforts to dealing with these problems, however, have been handicapped by a real failure to understanding their nature and possible remedies, I have taken it upon myself to change the dynamics for this country through environmental advocacy and climate actions and that spirit is what keeps me moving until today,” he said.

“I dislike the rate at which greenhouse gases are been released in our atmosphere which has become unbearable for our planet Earth. The heat-trapping gases are released by humans to obtain power for our modern lives but less did we put into consideration the huge amount of harm we are causing to the environment. We are doing this through burning fossil fuels, agriculture and land-use and other activities that drive climate change. Greenhouse gases are dramatically increasing in our planet and this rapid rise is a problem because it’s changing our climate at a rate that is too fast for living things to adapt to,” he lamented.

Dawda Cham looks up to the following people;

Mustapha Njie – as a successful businessman, who has tried to ensure that he is not the only one enjoying the profits of his business but initiated projects and programs through which he share his fortunes with others._

Essa Mbaye Faal – another successful man who shares his blessings with others and help those in need, especially young Gambians for them to have a better future.

Modou Turo Darboe – a very wealthy man who responds generously to causes that improve livelihoods not only in The Gambia but even in Senegal, notably the Casamance region. His style of giving is unmatched.

Dawda’s professional goal as a student of Biology, is to become a Medical Doctor in the nearest future to uplift the fragile health sector of The Gambia. He believe the health sector needs more doctors and nurses to attain world’s standard. He is also concerned with the fact that most people in remote areas in The Gambia don’t easily have access to health care services and he is committed to the process of bridging this existing gap.

Dawda Cham is also the winner of the Covid-19 poetry challenge. The competition was aimed at raising awareness among people on COVID-19 precautionary measures to curb the spread of the virus. After a submission of 83 videos, 16 videos were selected and the selected videos were published on EU in The Gambia and YEP-Gambia Social Media platforms for people to vote by viewing, sharing and liking the videos.

Dawda emerged victoriou and he received a cash prize of D10,000 and a free professional video was done for him on the same poem.

Posted in Featured News | Comments Off on Dawda Cham Has A Powerful Story To Share.

Buhari Orders Extension Of Itakpe-Warri Railway To Link South And North Before 2023 (Previous Post)
(Next Post) INDEPENDENCE DAY ADDRESS BY HIS EXCELLENCY, MUHAMMADU BUHARI, PRESIDENT OF THE FEDERAL REPUBLIC OF NIGERIA ON THE OCCASION OF NIGERIA’S SIXTIETH INDEPENDENCE
Previous Image