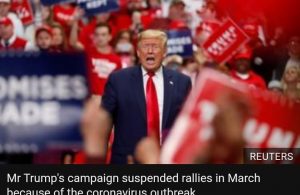 US President Donald Trump is to begin his first re-election campaign rally for several months in Tulsa, Oklahoma on the date that African Americans celebrate the end of slavery.

The rally will take place on 19 June, known as “Juneteenth”.

In 1921 the city of Tulsa was the site of one of the worst slaughtersc of black people in US history.

The news follows weeks of anti-racism protests sparked by the death of George Floyd, a black man, in police custody.

The Trump campaign, referring to the date of the rally, said his Republican Party was proud of its role in winning the Civil War and ending slavery.

Mr Trump’s rallies, seen as vital for energising his base, were suspended due to the coronavirus outbreak in March.

He faces re-election in November but is lagging behind his Democratic rival, Joe Biden, in the polls.

Correspondents say that while the virus remains a threat, Mr Trump’s campaign considers that large crowds at the recent protests will make it harder for his opponents to criticise his meetings.