Edo Poll: We Must Be Neutral At All Times, INEC Chairman Tells Electoral Officials 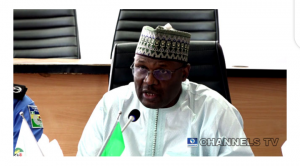 Afrinity Production make known to you the statement of the Chairman of Nigeria’s Independent National Electoral Commission, Professor Mahmood Yakubu, who has rallied officials of the commission to remain steadfast to its ideals in conducting the Edo governorship election.

“Nigerians and the international community expect so much from us. They are watching. It is important that we all remain above board in the performance of our respective duties,” Professor Yakubu said in a message to the staff of the commission on the eve of the election.

“We must ensure that no political party or candidate is accorded any advantage over the other. We must be neutral at all times and stick strictly to our Code of Conduct and Oath of Neutrality to which we have all subscribed.”

By playing their parts and delivering a free, fair, and credible election, the INEC boss believes the commission would have helped to better the country.

“For, at the end of the day, we would have all contributed to the sustenance of democracy and a strong electoral process that all Nigerians can trust,” he said.

Professor Yakubu, who said all is set for the much-anticipated poll, promised his colleagues and other officials of the commission that their welfare and condition of service will be given priority during the election.

He is also confident that they will rise to the occasion.

Posted in Featured News | Comments Off on Edo Poll: We Must Be Neutral At All Times, INEC Chairman Tells Electoral Officials