Employment in the UK drastically fell by the largest amount in over a decade between April and June, according to BBC. 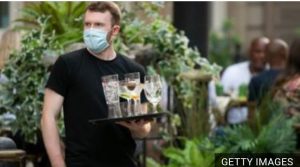 BBC said the number of people in work decreased by 220,000 on the quarter, according to what they get from the National Statistics.

This was the largest quarterly decrease since May to July 2009, the depths of the financial crisis.

The UK economy has been battered by the coronavirus pandemic, but unemployment has not surged as much as feared because large numbers of firms have furloughed staff.

However, analysts said unemployment was set to worsen in coming months as the scheme wound down, warning of a looming “cliff-edge” and a “lull before the storm”.

The youngest workers, oldest workers and those in manual occupations were the worst hit during the pandemic, the ONS added.

The UK unemployment rate was estimated at 3.9%, largely unchanged on the year and the past quarter, as millions remained “on the government-backed furlough scheme.”

Trump rushes out of the news conference after a shot (Previous Post)
(Next Post) The trial of the former Attorney-General of the Federation in Nigeria, Mr. Mohammed Adoke has been adjourned till August 13.
Previous Image