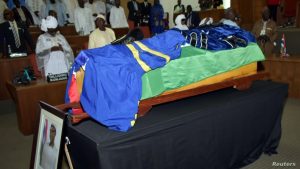 The Gambia’s first President Sir Dawda Kairaba Jawara, who passed away on Tuesday was buried on Thursday 29th August 2019 at the capital Banjul. .

The burial was attended by The current president, His Excellency Adama Barrow, many political party leaders, former ministers and cabinet members of his regime were also in attendance.

Sir Dawda Kairaba Jawara, ruled The Gambia for more than 30 years as Prime Minister and then as its first President after independence from Great Britain, until he was removed from power in a bloodless coup by Ex President Yahya Jammeh.

He sought refuge in the U.K. where he lived with his family up to 2002, when he returned home after President Yahya Jammeh granted him amnesty and returned his assets, which were seized by a Commission of Inquiry established by the military junta to investigate cabinet members and officials of the previous regime.

Mariam Jack Denton,Speaker of The Gambia National Assembly said he was known for his integrity, kindness and sense of humor.

“Our hearts are heavy with this lost. He was an ardent promoter of human rights. He was a patriot and a true son of this country.”

Sedia Jatta, one of the opposition leaders who contested 1987 elections against Dawda Jawara, described his former opponent as a democrat and a tolerant person.

“We are not only here to pay homage to who brought independence to this country, but to learn from the challenges he faced as a leader. We have to learn tolerance from him.”

Gambia President Adama Barrow said: “It is with deep regret that I deliver this statement on this solemn occasion. The entire Gambian nation is in a state of mourning. We are mourning because our nation has lost its first premier, prime minister and president for over 30 years.”

The Gambia is in a 7 days state morning which was declared by the president his excellency Adama Barrow. he has also ordered that the flag should be lowered to half-mast at all state institutions in respect of the former president.

President Barrow calls on all Gambians to use these trying moments to reflect and emulate the virtues Sir Dawda left as his legacy: peace-loving, tolerant, and democratic.

The president kindly urges all and sundry to pray to God to grant the departed soul eternal peace.

Posted in Featured News | Comments Off on First President of the Gambia is buried
Tags: Gambia news