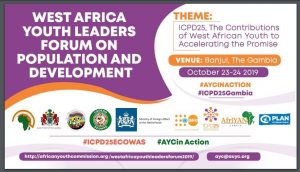 The National Youth Council in collaboration with its partners, Wednesday hosted a two-day West Africa youth leaders forum on population and development.

Held on theme: ‘ICPD25, the contributions of west African youth to accelerating the promise’, the forum is said to be the first West Africa youth leaders forum on population and development and seeks to engage youth on the implementation of their role to the Nairobi summit.

He said an estimated 60% of the population of the region is young people less than 35 years. This, he said, clearly suggests that young people are the future of the nation.

He indicated that much progress has been made since the 1994 international conference for population development (ICPD).

‘But the road to achieving universal access to sexual and quality reproductive health services for young people remains long.’

He noted that the West African Health Organization as part of its mandate advocates for governments and development partners to increase investment on youth education and health.

To also encourage partnership and networking amongst young people within the ECOWAS Region, it is important to strategically position young people in other to attain the agenda for the upcoming Nairobi summit” he added.

Hassan Jallow, the representative of the Minister of Youths and Sports said the government of The Gambia under the leadership of H.E President Adama Barrow has recognized young people as a significant factor in national development.

‘The Gambia has always been at the forefront in championing and promoting youth development at all levels.’

He noted that the National Youth Council is a public agency established in year 2000 by an Act of Parliament, saying council seeks to mobilize and enhance the participation of young people in national development efforts.