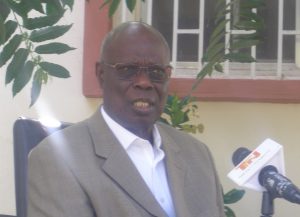 The newest party in the country dubbed Gambia for All (GFA) party which is founded by Bakary Bunja Dabo, has recently elected its officials at a local hotel in Kololi.
No official announcement has been made by the Independent Electoral Commission (IEC) of the Party’s registration yet.
In a press statement issued to Foroyaa by its leaders, it is said the party held its constitutive congress from Friday 11th to Sunday 13th October, 2019 with three main objectives.
The objectives were to review and approve the draft constitution of the party; elect party officials; and establish guidelines in the form of resolutions on certain thematic areas of particular interest to the party.
These include development of genuine participatory democracy; women’s empowerment for sustainable nation building; youth participation in the national political process; and conquering the political space (at home and in the diaspora) – and challenges on GFA’s path to participatory democracy.
The statement said forty nine (49) delegations out of fifty three (53) constituencies graced the occasion, plus representatives from the Diaspora.
Overall, the statement added that, the congress was conducted in an atmosphere of peace characterized by seriousness and commitment.
Four officials have been elected and they are as follows: Party Leader and Secretary General is Bakary Bunja Dabo; Party National Chairman is Salieu Taal; Party National Treasurer is Ndambou Touray; and Party Chief Mobilizer is Fabakary Sidi Fadera.
The Party leader, Mr. Dabo, commonly referred to as BB Darboe, was Minister of Education for three years and vice president for ten years to late President Dawda Jawara and briefly worked for the AFPRC government as Minister of Finance.
He was a member of the People’s Progressive Party (PPP) before losing the election to the post secretary general to Papa Njie earlier this year during the Party’s Congress. He later broke away from the Party and now established GFA Party.