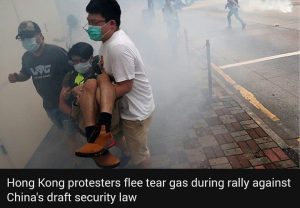 John Lee said the city had become “shrouded in the shadow of violence”.

After months of silence, this weekend saw a fresh start of protest after the government in Beijing put forward a security law which would severely change Hong Kong’s rarely status.

The opposition say it is a direct strive to curtail freedoms and silence critics.

The bill was put forward on Thursday as China’s parliament, the National People’s Congress (NPC), come together for its obstructed annual gathering.

China’s foreign minister, Wang Yi, said the legislation – which would ban “treason, secession, sedition and subversion” – should be brought in “without the slightest delay”.

‘On Sunday, thousands of people defied government warnings and marched through the city centre to protest against the bill.’

‘Riot police fired tear gas and water cannon at demonstrators, who were wearing face masks to protect against the spread of coronavirus. There were at least 180 arrests.’

In a statement on Monday, Secretary for Security John Lee said that in the past year, “the violence in Hong Kong has been escalating, with many cases involving explosives and genuine firearms”.

“Terrorism is growing in the city and activities which harm national security, such as ‘Hong Kong independence’, become more rampant.”

He said the fight on Sunday showed “the need and urgency of the decision to be deliberated by the NPC” and that the law would ensure Hong Kong’s “long-term prosperity and stability”.

The Commissioner of Police Chris Tang also embraced the bill, saying weapons and explosives take from protesters showed Hong Kong was “at the risk point of national security and there is a need to take effective measures to prevent the situation from deteriorating”.