Know More About The First Female President Of The University of the Gambia. 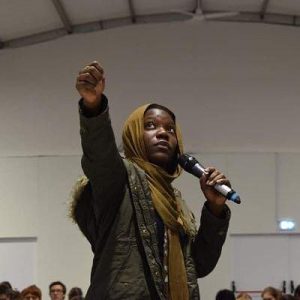 Afrinity Production draw attention to Fatou Jeng who has over five years’ experience in Climate Change and Environmental Development work . She completed her bachelor’s degree in Journalism and Digital Media at the University of the Gambia with distinctions and made an undergraduate thesis on Newspaper Coverage of Climate Change in the Gambia. She is currently pursuing her masters degree at the University of Sussex, UK as a Chevening scholar 2020.

Fatou is the founder of Clean Earth Gambia, an Environmental NGO working mainly on climate related issues, she is also the Policy Operations lead for Women and Gender to the United Nations Framework Convention on Climate Change Youth Constituency and Secretary General of Plant-for-the- Planet Global Board. 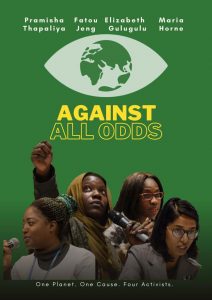 She has supported with several youth policy papers and positions on climate change especially on the Gender Action Plan, Action for Climate Empowerment, Youth in Agricultural initiatives to mitigate climate change and was one of the young people who facilitated youth engagements during the Africa Climate Week in 2019.

Fatou has trained over 500 school children on Climate Change in The Gambia and provided training to communities, youth and youth organizations on pressing environment challenges. Organized series of cleansing exercise, media outreach and community outreach on climate change and the environment. Currently, her organization is partnering with future proof banjul to plant 5000 coconut trees at the banjul beach to mitigate the impacts of climate change.

“I started engaging in the fight against climate change because of the impacts it has in The Gambia such as sea level rise in Banjul. Experts have mentioned that Banjul will be inundated under a one meter sea level rise. Banjul has a population of over 30,000 people which means these people will be impacted by this climate change threat,” she said. 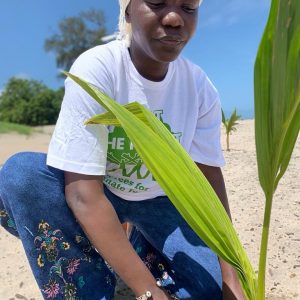 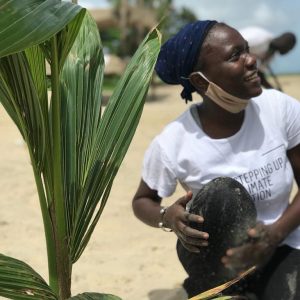 Jeng also engages in series of tree planting exercises and publishes environment articles on the Chronicle Online news (one of the leading online news platforms in the Gambia).
She has served as a speaker in many International and national conferences on the environment such as; Speaker at the Global Landscape Forum (Bonn, 2018), moderator during the plenary session on SDG13 at the UN ECOSOC Youth Forum (New York, 2019), Speaker on Gender and Climate Change at the official closing ceremony at the Global Conference of Youth on Climate Change (Bonn, 2017), Speaker at ECOSOC Youth Forum on SDG7 (New York, 2018), Facilitator at ACE Youth Forum( Bonn, 2018), Speaker at UN DAY( Gambia, 2018), Moderator, Open Dialogue with UN Youth Envoy and UNFCCC secretariat( Katowice, 2018) and many more.

She was recently part of a group of 20 female climate activists from global south who wrote an open letter to the G20 finance ministers during the G20 meeting demanding for climate action.

Fatou has received series of recognitions and award for her work in creating awareness on the environment. She was recently awarded as one of the 25 Emerging Young Persons in
Africa during the Youth Entrepreneurship Summit ,2019.

Youth Dialogue recently awarded her as “Youth of the Month” in June 2019 for her impact in creating awareness on environmental issues. What’s on Gambia recognized her as one of the 30 most Influential Youth leaders of the
year., influential-young-gambians-of-2019 and the Pan African Youth Leadership Foundation awarded her a youth Leadership Award 2019 for contributing to the development of her community. 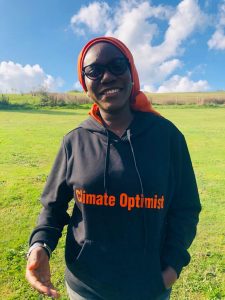 She was one of the 30 Young people selected by the United Nations Youth Envoy office to support the organization of the first ever United Nations Youth Climate Summit in 2019 .Through her engagements, she has developed strong mobilization, networking, coordination and communication skills which is of significant value to the work she does for her community.

Fatou look up to Wangari Maathai, a Nobel peace prize winner from Kenya who was a politician and an eco-warrior.

Her goal is to complete her studies in Environment, Development and Policy and then head the National Environment Agency. Also to Lecture at the University of The Gambia on Climate Change and build Clean Earth Gambia to continue to compliment the efforts of the government in mitigating the climate crises.

Posted in Featured News | Comments Off on Know More About The First Female President Of The University of the Gambia.