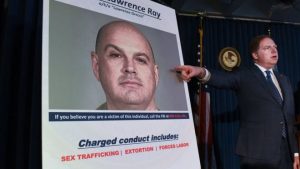 A man accused of abusing his daughter’s university roommates has been arrested in the US and charged with extortion, sex trafficking and forced labour.

The charges were prompted by a story in New York magazine, which detailed the alleged workings of Mr Ray’s “cult”.

Mr Ray, 60, has denied the allegations.

He was arrested on Tuesday in the state of New Jersey.

“For the better part of the last decade, we allege there was no limit to the abuse Ray’s victims received, and there is no way of knowing the amount of damage he may have caused them in the years to come,” said FBI Assistant Director William Sweeney.

What are the accusations?

According to New York magazine, the abuse started when Mr Ray showed up at his daughter’s university in 2010, after being released from prison, where he had been serving time on charges related to a custody dispute.

The publication said his daughter described him to friends as a “truth-teller” who had been unjustly imprisoned. A former FBI informant, Mr Ray had been a close associate of former New York police chief Bernard Kerik. The pair fell out and Mr Ray cooperated with authorities in a high-profile corruption case against Kerik.

Mr Ray moved into his daughter’s dormitory, where prosecutors say he presented himself as a father-figure and began conducting “therapy” sessions.

During the sessions, he allegedly learned intimate details about the students’ private lives and mental health struggles. He alienated several of them from their parents, persuading some to move into a Manhattan apartment and convincing them that they were “broken” and needed his help.

After gaining their trust, prosecutors say Mr Ray subjected his victims to interrogation sessions in which he falsely accused them of harming him by attempting to poison him or damage his property. He allegedly demanded confessions, using tactics including sleep deprivation, sexual humiliation and physical violence.

On one occasion, after accusing a male victim of damaging his property, Mr Ray brandished a knife and threatened to dismember the victim with it, forcing a false confession, the indictment says.

He is accused of using the false confessions to extort money, which the victims attempted to pay by draining their parents’ savings and opening credit lines, among other means. Authorities say he collected more than $500,000 from one woman after forcing her into prostitution, while several were forced to perform unpaid labour.

In total, he is accused of extorting about $1m from at least five victims.

Authorities say he laundered the proceeds of his crimes through an internet domain business.

Manhattan US Attorney Geoffrey Berman said: “College is supposed to be a time of self-discovery and new-found independence. But as alleged, Lawrence Ray exploited that vulnerable time in his victims’ lives through a course of conduct that shocks the conscience”.

Mr Ray has denied the charges, claiming they are the result of a conspiracy against him.

In a statement reported by US media, Sarah Lawrence College described the charges as “serious, wide-ranging, disturbing, and upsetting”.

It said it launched an internal investigation after the New York magazine story was published, which it said “did not substantiate those specific claims”.