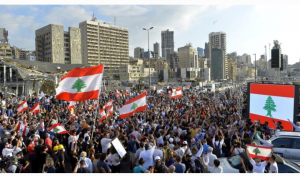 Lebanon confirmed its highest daily toll of deaths and new infections from coronavirus as the country struggle with the aftermath of an enormous port explosion that rocked the capital, Beirut, and overwhelmed hospitals.

Seven people died of the novel coronavirus in the past 24 hours, the health ministry said, and 309 new cases were confirmed.

That brought the toll of infections to 7,121 and deaths to 87 since the start of the country’s outbreak in late February.

BBC said even before the explosion last week there had been a recent increase in infections.

According to BBC, the daily figures are still very low in compay with others countries in the region, they have risen in recent days, straining health facilities already overwhelmed with the influx of the injured from the August 4 explosion.

The World Health Organization (WHO) has warned the chaos caused by the blast that killed more than 200 people, injured some 6,000, and left 300,000 without habitable housing risked accelerating the spread of COVID-19, the disease caused by the virus. Hospitals, many of which were damaged and their staff injured, were flooded with wounded.