No SARS Officer Will Be Part Of New Tactical Team – Police 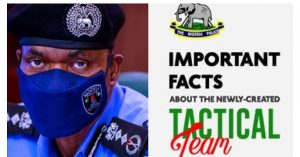 Afrinity Production reliably unvel the statement by the police in Nigeria, saying that no member of the now-defunct Special Anti-Robbery Squad (SARS) will be a part of the newly constituted Special Weapons and Tactics (SWAT) Team.

Due to a very intense protest that has lasted for days, the Inspector-General of Police, Mohammed Adamu, dissolved the infamous subunit of the force, SARS.

Two days after disbanding SARS, the IGP set up a SWAT unit, however, this move did not go down well with those who had protested for the dissolution of the anti-robbery squad, causing them to change the mantra from #EndSARS to #EndSWAT.

The call for the disbanding of the new unit is hinged on the arguments suggesting that the decision to immediately replace SARS operatives with SWAT is hasty and unpremeditated.

In a bid to throw more light on the new unit set up by the IGP, the police put out a statement via Twitter stating what their mandate will be, however, rather than refer to them as SWAT, police spokesman Frank Mba who put out the statement used the phrase ‘Tactical Team’.

It is unclear if the Police have changed the name of the newly constituted unit from SWAT to Tactical Team, but the spokesman said no operative of SARS will be included in the new team.