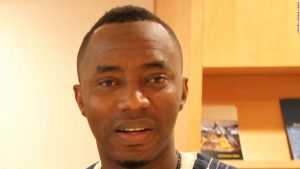 A detained Nigerian journalist and former presidential candidate charged with treason has been granted bail but remains in custody, one of his lawyers told CNN on Tuesday.

Nigeria’s secret police have been holding, Omoyele Sowore, founder of a New York-based news site since his arrest August 3.
He was initially detained by the Department of State Services (DSS) for calling a nationwide demonstration against President Muhammadu Buhari’s government, but formal charges against Sowore, including treasonable felony, cyberstalking and money laundering, were made public only last week.
A court in Abuja ordered the journalist to be immediately released pending his arraignment, according to court documents seen by CNN.
His lawyer, Femi Falana, said the journalist is being held illegally and accused the government of bringing up trumped-up charges against him.
“We are saying the machinery of the state cannot be used to harass political opponents,” Falana told CNN.
DSS spokesman Peter Afunnaya told CNN the case was before the court and declined to make further comment. Afunnaya said he would “get back” with more information about the journalist’s whereabouts.