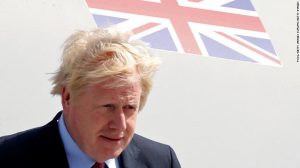 Boris Johnson’s plans to cancel parliament has ignited protest across the nation and  over 1.3 million have signed an online petition  urging the prime minister to cancel the plan of suspending or proroguing  parliament.

This petition was posted on the UK Government and Parliament Petitions page after the announcement of the prorogation on Wednesday morning.

Parliament considers all petitions that exceed 100,000 signatures for a debate, while the government must issue a response after 10,000 signatures.
The petition demands that Johnson’s suspension of Parliament — which will go into effect just days after MPs return from summer recess on September 3 — be abandoned “unless and until the Article 50 period has been sufficiently extended or the UK’s intention to withdraw from the EU has been canceled.”
Protesters also gathered outside Parliament Wednesday evening, an estimated 1,000 to 1,500 protesters were present.
On Wednesday, the Queen approved Johnson’s request to suspend Parliament. The suspension will end on October 14 for the Queen’s Speech, where the monarch will present the governmental agenda for the next parliamentary session.
Johnson’s critics have denounced the move as potentially unconstitutional and undemocratic.