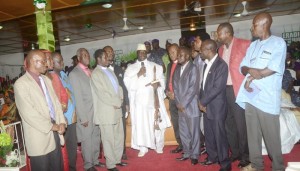 The Pastors Intercessory Forum of The Gambia has described His Excellency Sheikh Professor Alhaji Dr. Yahya Jammeh Babili Mansa as a king of victory and wisdom.

The Gambian leader received the pastors in Kanilai on the sidelines of a mega wrestling contest and cultural jamboree organised as part of activities marking the celebrations of the 21st edition of the July 22nd Revolution.

The people of God said they were in Foni Kansala settlement of the West Coast Region to return thanks and appreciation to the Gambian leader for showing compassion by offering general amnesty to prisoners, who were condemned by law on various offences; ranging from treason, murder, rape and drug trafficking.

Professor Bishop Augustyn Bernards, chairman of Pastors in The Gambia, in his introductory remarks said: “We have to appreciate and thank His Excellency the President for surprising the whole world, again His Excellency has shocked the world, all the oppositions around the world by showing compassion to release prisoners who trespassed the law of such a magnitude.”

President Jammeh in 2012 received the Pastors Intercessory Fellowship International award for the Best African Serving President, thus, according to Bishop Augustyn this has shown that the award was ordained by God.

“Truly I am proud of you, this has shown that God has ordained the award and this night I came with some of the pastors in The Gambia. We are the people that are praying for The Gambia, the President, his family, his cabinet and the whole country. We have been praying for this country and the people of this country since 2003, for peace, security, stability, development and health of the whole nation. This has truly shown that God is answering our prayers,” he told the President.

You have given us the courage to continue to pray for the nation and you made us proud, Your Excellency, the pastors in The Gambia are proud of you. We gathered and pray from the 17 to the 19 of July and the theme for our prayers for this year to celebrate the 21st anniversary of the July 22nd Revolution was forgiveness and reconciliation and we were surprised to hear on the news and also read from the newspapers that His Excellency has forgiven those that have trespassed the law. We want to tell you that God said when you forgive people that trespass, you also would be forgiven. We declared the word of God that His Excellency is a clean person. We have come to thank you, to appreciate you.

Rev. Momodou Daffeh for his part said: “You are really a king in the Bible; you have demonstrated two things; you are a king of victory and you will continue to conquer and nobody will conquer you, and two you are a king of wisdom. You are the only king of the 21st century who has with this magnitude forgiven people as what you have done this year. You are a blessing not only to Gambia but a blessing to West Africa, you are a king for Africa and you are a world leader and God will never give you to your enemies, you will rein until when you are tired.”

Pastor Desmond Conteh added: “I was going to say that with this demonstration of your love and kindness for this nation and the world is a sign that this wisdom is granted on to you by the Almighty God. It is only God that can give such wisdom to any leader that can forgive those who trespass him. May the lord continue to grant you more of His wisdom to rule The Gambia, Africa and the world.”

“I was pleased when I heard you said you read both the Quran and the Bible and since 2003 I and other pastors established the Pastors Intercessory Forum that is prayers for the nation. We have been praying and today we are here to thank you for all the good gestures and for all that you have done for this country and the people living in this country. I have lived here 18 years now and I have taken Gambia as my home and I will continue to be a Gambian and I am proud to be a Gambian. So we want to present to you this book which contains the Acts of Leadership; when you read this book you get more wisdom and I pray that God will bless you. May He guide you, protect you and live you where your enemies never expected. We are happy to be your children and God bless you.”

Reacting to their words of prayers and wisdom, the President said: “I am surprised but not completely surprised by your actions; as religious leaders this is what is expected of you towards leaders, where a leader is going against the will of God, no matter who he is that is your responsibility as religious leaders to tell him. No matter how powerful he is he is not as powerful as God. You have demonstrated today that you are true religious leader when you see some action being taken that is in line with the teachings of Bible or Quran this is what is expected of you. If I do anything that is not expected of me in the Quran come and tell me and so also with the Bible too. Tell me this is not godly act. I would always listen to you. You have shown that you are very genuine. I can assure you that, as from today, I will give you hundred percent support because you stand for the good of humanity. May the Almighty God bless you for being honest, don’t stop at this, if you see me do anything that is not correct is your responsibility to come forward and say you are a man of God but you leave the way please come back.”