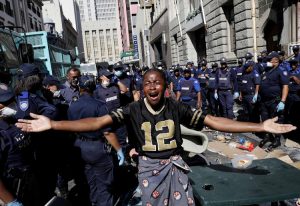 The refugees had been camping at the Central Methodist Mission Church for four months.

In January Cape Town Council won a court case allowing it to evict them after business people who own souvenir shops near the church complained that the area was filthy.

Refugees protested against the court decision saying they had nowhere else to move to.

But on Sunday they were forcefully removed, as some videos show:

The group of refugees and asylum seekers ended up at the church after they were evicted from outside the offices of the UN’s refugee agency (UNHCR).

They had been staging a sit-in protest outside the UNHCR offices in October, demanding to be flown to other countries after a bout of attacks against foreigners.

Libya conflict: ‘Stressed’ Ghassan Salame resigns as UN envoy (Previous Post)
(Next Post) Cameroonian filmmaker: ‘Why I made a film for £5,000’
Previous Image