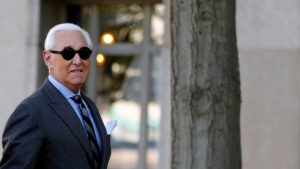 Four US prosecutors working on the case of Roger Stone – a convicted former advisor to US President Donald Trump – have quit.

Their decision comes after the Justice Department said it planned to reduce the amount of prison time it would seek for the president’s longtime ally.

Stone was found guilty on seven counts of lying to Congress, obstruction and witness tampering.

The prosecutors had recommended a sentence of seven to nine years.

In a tweet, Mr Trump had called the recommendation “very horrible and unfair”.

Hours after Mr Trump’s tweet, the Justice Department said it would lower the amount of prison time it would seek for Stone.

The department claimed the decision was made on Monday night, before Mr Trump’s tweet. Mr Trump told reporters he did not speak to the Justice Department about it.

Who is Roger Stone?

He is a veteran Republican political consultant and friend to the president. He famously has a tattoo of former president Richard Nixon on his back.

He was found to have lied to investigators under oath and attempted to block the testimony of a witness who would have exposed his dishonesty.

Why have the prosecutors resigned?

Federal prosecutors in Washington recommended to a judge on Monday that Stone should face seven to nine years in jail for trying to thwart the investigation.

The president swiftly voiced his opposition in a tweet.

Later on Tuesday, a Justice Department official, who had just joined the case, called the recommendation “excessive and unwarranted” in a new court filing. None of the previous four prosecutors signed it.

The four prosecutors – Aaron Zelinsky, Adam Jed, Michael Marando and Jonathan Kravis – then withdrew from the case. Mr Kravis then revealed be was quitting as a federal prosecutor altogether.

Stone is due to be sentenced on 20 February.

“The president seems to think the entire Justice Department is just his personal lawsuit to prosecute his enemies and help his friends,” Chuck Schumer, the top Senate Democrat, told reporters.

Adam B. Schiff, the California Democrat who chairs the House committee, said any intervention by the president would have been “a blatant abuse of power”.

“Doing so would send an unmistakable message that President Trump will protect those who lie to Congress to cover up his own misconduct and that the attorney general will join him in that effort,” he said in a statement.