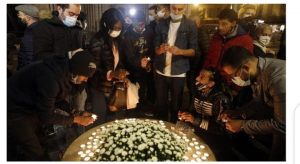 Afrinity Production reliably discloses the mourning of southern French city of NICE for the stabbing of three people to death in a suspected jihadist attack at a church.

A makeshift memorial has been set up outside the Notre-Dame basilica, where people have placed flowers and lit candles for the victims.

He is to hold an emergency meeting with senior ministers on Friday.

Meanwhile, security has been stepped up at places of worship and schools across France following two similar attacks within two weeks. Earlier this month a teacher was beheaded in a Paris suburb after showing controversial cartoons of the Prophet Muhammad to some of his pupils.

New Zealand voted for legalization of “Euthanasia”, that is for dying to be legal for terminally ill people (Previous Post)
(Next Post) 21 Dead As School Bus, Trailer Collide In Enugu
Previous Image