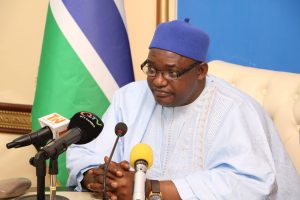 Director of press and public relations at State House Amie Bojang Sissoho has suggested President Adama Barrow’s stiff-arm attitude towards the media is down to the way and manner some journalists ask questions.

President Barrow since August 2018 spoke to the independent media once – Paradise TV – after a news conference that will be remembered for his total meltdown.

Top political commentator Dr Ismaila Ceesay had last year branded the president as clueless but at a press conference, President Barrow fired back at Dr Ceesay in a riposte that went massively viral. Gambians online later mocked the president by using his own phrase against him – ‘where were you’. President Barrow has since not participated in any news conference and speaking to only one independent media, Paradise TV.

Amie Bojang Sissoho in an exclusive interview with Kerr Fatou said some journalists ask questions in a ‘disrespectful’ way, prompting the presidency to have a change of policy.

“We voted for the president but we should not disrespect him. If he agrees to sit and chat, that chat should be done respectfully. But if we realise that Fatou will disrespect me when we sit, I will not sit with you,” Bojang-Sissoho said.

“Amie Bojang has no vision and is out of touch with modern public relations practice and mass communication. She is barely educated, inexperienced (PR wise), professionally rusty, unrefined, arrogant and the biggest public relations imposter to come out of The Gambia.

“Amie Bojang as a leader in her capacity is reactive and not proactive. She does not build bridges with the media but burns them. Amie Bojang should be moved to one of the Gambian embassies abroad and be replaced with a seasoned Public Relations expert who can properly sell Barrow to Gambians and control the narrative than constantly trying to put out fires,” Darboe said.