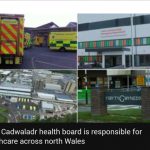 Not Less than 1,700 mental health patients have been mistakenly discharged from support services during the lockdown in north Wales.

*Last week it happen when Betsi Cadwaladr health board advised people to seek new referrals once the pandemic had eased.*

‘It had estimated that between 200 and 300 were affected, but the true figure is 1,694, according to a letter it has since sent to a Plaid Cymru politician.’

The health board has apologised and said it was finding the whereabouts of the patients.

Last week, Simon Dean, the health board’s interim chief executive, make known a Senedd committee discharging the patients was an “error that should not have occurred”.

He gives an estimation of between 200 and 300 people were affected but said his team was “working through the precise number”.

People across north Wales were affected, rather than just Flintshire-based patients as initially thought.

Mr ap Iorwerth said: “One patient being discharged before time is one patient too many.

“To now learn that 1,694 patients were discharged early, while they still needed support from mental health services, is deeply distressing.

“I welcome the assurance that all 1,694 patients will be contacted in the coming days to be reinstated to this vital service, but the question remains as to how such a decision could have happened right across the health board area, and how there could have been such widespread ‘misinterpretation’ of guidance.

“It should have been pretty clear that this would be unacceptable.