Backlash on Trump’s handling of protest 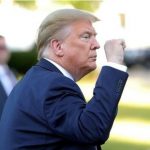 President Donald Trump’s carefree posture against protests across the United States and warnings to call out the military to put an end to the unrest in American cities are drawing criticism from a wide swath of US leaders and have instigated a backlash among Democrats in Congress and even some Republicans.

‘As the president was speaking on Monday, federal police in riot gear and on horseback using chemical gas and flashbangs then cleared Lafayette Park, a city square of grass and trees that has been the epicentre of the protests in Washington, DC.’

*Trump’s words and police actions in Lafayette Park have been widely condemned and opened a schism among US leaders over how best to handle the protests, looting and violence that have swept the nation.*

Senator Ron Wyden, a Democrat, tweeted that Trump’s “Fascist speech … verged on a declaration of war against American citizens.”

The Reverend Mariann Budde, the Episcopal bishop of Washington, DC, said she was outraged that “they would be clearing with tear gas so they could use one of our churches as a prop”.

Massachusetts Governor Charlie Baker told reporters at a news conference after the call with Trump, the president’s side taking words is faulting to provide the leadership the nation needs right now.

“I heard what the president said today about dominating and fighting. I know I should be surprised when I hear incendiary words like this from him, but I’m not. At so many times during these past several weeks, when the country needed compassion and leadership the most, it was simply nowhere to be found,” Baker said.

Republican Senator Pat Toomey told reporters in Philadelphia on Monday that the president should speed down the language he had been using in his tweets.