Nigeria on Monday recorded 290 fresh cases of COVID-19 with the number of recovered persons now 33,346. 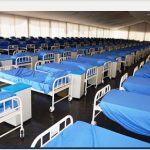 The Nigeria Centre for Disease Control (NCDC) disclosed the latest COVID-19 figure in a tweet on its handle.

According to Channels TV, Nigeria’s new cases were confirmed in 15 states and the Federal Capital Territory (FCT), taking the number of infected people in the nation to 46,867

The NCDC latest data indicate that Lagos and the FCT reported the highest cases for the day – 82 each.

The NCDC data further revealed that the disease has so far claimed 950 lives.

Posted in Featured News | Comments Off on Nigeria on Monday recorded 290 fresh cases of COVID-19 with the number of recovered persons now 33,346.
Tags: Corona virus, Corona virus in Nigeria

Nigeria becoming one of the epicentres of Corona Virus in Africa as Infections Surpass 29, 000 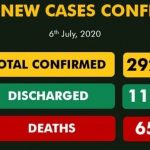 This is according to the latest data released by the Nigeria Centre for Disease Control (NCDC).

In a tweet on its official handle on Monday night, the NCDC explained that the new cases were reported in 19 states and the Federal Capital Territory, taking Nigeria’s total infections from the virus to 29, 286.

Out of those infected with COVID-19 in Nigeria, 11,828 have been discharged with 654 deaths reported, the NCDC data revealed.

Posted in Featured News | Comments Off on Nigeria becoming one of the epicentres of Corona Virus in Africa as Infections Surpass 29, 000
Tags: Corona virus in Nigeria, Covid-19 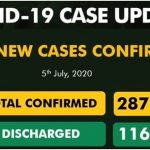 Nigeria’s COVID-19 infections continued to rise as the country on Sunday reported 544 fresh cases of the pandemic.

This is according to a tweet by the Nigeria Centre for Disease Control (NCDC) which said the new figure brings the West African nation’s total confirmed cases to 28,711.

The agency said the new COVID-19 cases were reported in 18 states in the country and the Federal Capital with Lagos State having the highest number of infections for Sunday – 199.

So far, 11,665 persons who contracted the virus have been discharged in Nigeria with 645 deaths recorded, according to their Centre for Disease Control. 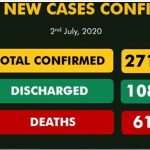 This is according to a tweet on the official handle of the Nigeria Centre for Disease Control (NCDC). There is also an alarming fact that, the country is becoming one of the epicentres of the pandemic.

Giving a breakdown of the new cases, the agency said they were recorded in 20 states in the West African country, bringing the total infections to 27,110.

Lagos State had the highest number of fresh infections for the day – 193 – and is followed by the Federal Capital Territory (FCT) with 85 cases of the virus with Oyo State having 41 persons infected. 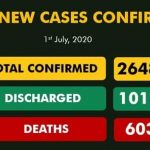 Nigeria has confirmed 790 new COVID-19 infections, the highest in a single day, bringing the country’s toll of infections to 26,484.

This was disclosed yesterday evening by the Nigeria Centre for Disease Control (NCDC) in a tweet via its official handle.

Just like the past days, the new cases were confirmed across 20 states of the federation and the Federal Capital Territory (FCT). 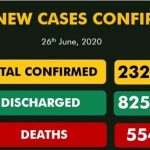 Nigeria has confirmed five new COVID-19 deaths with the total number of infections rising to 23,298.

The Nigeria Centre for Disease Control (NCDC) disclosed this via Twitter on Friday night.

The agency confirmed the new cases in 18 states and the Federal Capital Territory, Abuja.

Lagos still remains the epicentre of the virus with 259, while the FCT recorded 20 cases.

Statistics from the health agency shows that Oyo is trailing behind Lagos with 76 cases, Katsina with 69 cases and Delta having 66. 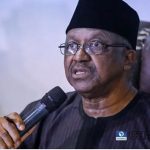 Nigeria’s Minister of Health, Dr Osagie Ehanire, has put forward on how Nigeria can reduce the death rate as a result of the coronavirus pandemic.

Briefing reporters on Thursday in Abuja, he urged Nigerians to see the increase in the number of confirmed cases as a warning that fatalities would increase too.

Ehanire, who spoke at the daily briefing of the Presidential Task Force on COVID-19, however, said there was no cause for alarm as certain measures could be taken to control the death toll.

He explained that majority of deaths confirmed were over 50 years and those with pre-existing ailments such as diabetes, cancer, and hypertension, among others.

The minister urged the people to specially protect those who fall in such groups, adding that they should be encouraged to stay at home to limit them from getting exposed to COVID-19.

He stressed the need for them to wear face masks once outside their houses, or when inside the house with persons who may have been exposed.

He urged them to avoid going to market, worship centres, and places where there can be a crowd.

The minister advised all persons in the vulnerable group who tested positive to immediately go to a treatment centre, in their own interest. 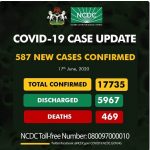 Nigeria on yesterday confirmed 587 new cases of COVID-19, pushing the nation’s toll of infections towards the 18,000 mark.

The Nigeria Centre for Disease Control (NCDC) in a tweet stated that the country has now confirmed at least 17,735 cases of the novel coronavirus with 469 deaths and 5,967 recovered patients.

Nigeria is currently in the second phase of easing its lockdown restrictions, with worship centres expected to restart in certain states. 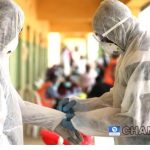 The Nigeria Centre for Disease Control (NCDC) on Tuesday make known 663 new positive cases of coronavirus (COVID-19) in the country.

This figure happen to be the highest daily increase since the country started reporting coronavirus cases in February and brings the total number of confirmed cases in Nigeria to 13,464.

As per the NCDC, Lagos State recorded the highest number of infections for the day in the country with 170 cases while Ogun and Bauchi had 108 and 69 cases respectively.

Of the number of positive cases in Nigeria so far, 4,206 persons have fully recovered and have been discharged while 365 persons have died. 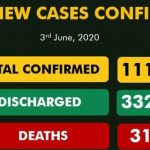