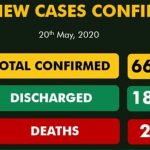 Coronavirus cases in Nigeria increased further on Wednesday with 284 cases confirmed by the country, in spite of efforts out in place by authorities to drastically drag the curve of the pandemic.

The new cases, recorded by specialist agency the Nigeria Centre for Disease Control on Twitter took the country’s total infections to 6,677 out of which 1,840 have been discharged with 200 losing their lives

Data from the NCDC showed that the cases were escalatimh across 12 states and the FCT with their capital city Lagos are the highest number of infections for the day with 199 cases.

A further breakdown of the figures showed that Rivers had 26 new cases, Oyo 19 cases, the FCT and Borno eight each, Plateau seven, Jigawa six, Kano, five, Abia two, and the quartet of Ekiti, Delta, Kwara, and Taraba each confirmed one case

Meanwhile, Bauchi State Government make known the elevating of the ban on religious activities in the state, suggesting that parts of the country are now choosing to return to their normal activities. 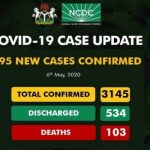 Four cases were confirmed in Ogun, 3 in Katsina, while Kaduna and Adamawa have on case each.

Meanwhile, 534 patients have recovered so far and have been discharged from the hospital, while 103 persons have died so far.