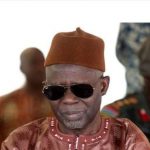 The head of the United Democratic Party has dare President Adama Barrow and his cabinet to go on with the next election under the 1997 constitution if they are not ok with the starting date of the two-term curtailment provision in the draft constitution.

He said this will make “serious people who will form the government in 2021 to hold a referendum” on the draft that will be agreed open by an incumbent who will act in good faith to take it in good faith that his term commences from the date of his election.

Ousainu Darboe made these known while answering questions from the media as he gives his Koriteh message over the weekend.

‘Darboe, who was onetime described by President Adama Barrow as his political god-father, said 10 years is adequate time for any sincere well-intentioned and dedicated leader to pursue an agenda for the Gambian people and leave it to his successors to build on.’

He said the facilitation on the limit of a presidential term will help boost our new found democracy on a strong starting point and help leadership and ideas related with them are subject to change and restoration.

“Conversely, bad leaders who fail in their responsibilities entrusted to them will have a definite exit frame sparing the nation the spectre of being saddled with failed leaders who are adept at clinching onto power,” he concluded.