Homosexuality in The Gambia 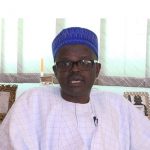