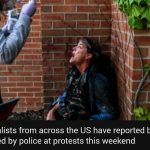 Many journalists covering anti-racism protests that have sparked the US have reported being attacked by security forces using tear gas, rubber bullets and pepper spray.

In numerous cases, they said it was despite showing clear press recommendations.

Such attacks “are an unacceptable attempt to intimidate [reporters]”, said the Committee to Protect Journalists, a New York-based group.

The strike on journalists from protesters have also been reported.

*The arrest of a CNN news crew live on air on Friday in Minneapolis, where unarmed black man George Floyd died at the hands of police, first drew global attention to how law enforcement authorities in the city were treating reporters covering protests that have descended into riots.*

But over the weekend a lot of attacks on journalists and media crews around the country were reported on social media. In total the US Press Freedom Tracker, a non-profit project, says it is making findings of more than 100 “press freedom violations” at protests in the last three days. About 90 cases involve attacks.

On Saturday night, two members of a TV crew from Reuters news agency were fired at with rubber bullets while police disband protesters in Minneapolis refusing to obey an 20:00 time limit.