Iraq rejects Turkish military action on its soil after commanders killed in a drone attack in northern Kurdish region. 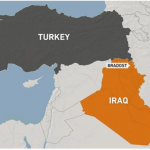 According to Aljazeera, Iraq has cancelled a ministerial visit and summoned Turkey’s ambassador on Wednesday as it blamed Ankara for a drone attack that killed two high-ranking Iraqi military officers.

Two border guard battalion commanders and the driver of their vehicle were died from the attack on Tuesday, the army said in a statement, marking the first Iraqi troop deaths since Turkey inaugurated the cross-border operation in mid-June against Kurdistan Workers’ Party (PKK) rebels.

Iraq’s foreign ministry – which already summoned the Turkish envoy twice over the military action on its soil – said the ambassador would this time be given “a letter of protest with strong words” rejecting the offensive.

The outrage ministry also confirmed the Turkish defence minister would no longer be welcomed for a planned visit on Thursday.

Posted in Featured News | Comments Off on Iraq rejects Turkish military action on its soil after commanders killed in a drone attack in northern Kurdish region.
Tags: Iraqi News