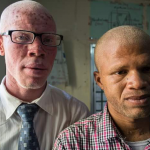 Albinism is known to be an hereditary gene that causes a lack of pigmentation in the skin and the hair and it
comes with a number of associated health problems including poor vision, functional blindness and high skin sensitivity to the sun which can cause cancer.

Abdul-Rahim King is presently the chairperson of the albinism society of The Gambia, which
is an NGO working to build opportunities and access to education, raising awareness and also working to provide basic needs like sunscreens and sunglasses for people with albinism.

Graduating from a private school and having an educator father couldn’t save King from the stereotypes. He discloses of his teacher sending him to the back of the classroom where he struggled to see the black board.

“That’s what happens in most part of the country. A lot of kids with Albinism are sent to the back of the classroom because of stereotypes and the teachers do not understand that we actually need to sit in front so we can see properly and get proper notes.
There were times I had to go to friends later on and caught up on notes because I could not see the notes on the
board”.

Apart from the seating arrangement, Abdul-Rahim was also call “puna” a local name used to refer to albinos. Besides not liking the name, his thought was that “kids will always be kids”
and that’s why they use the word to refer to him.

What also bothered Abdul-Rahim was that people will spit in their shirts when they passed
him as a child so that their kids will not have albinism.

Though Albinos in the Gambia might not face some discriminatory threats from society
compared to those in South Africa and other part of the world. But there is still a long way to go in supporting them and seeing them as a normal human being.

Abdul-Rahim is not alone in the fight for the right of Albinos, interviews with other people shows a great concern.

Isatou Jaiteh, a student at University of the Gambia said, Albinos in the Gambia feel isolated due to the discrimination against them and the sunlight is highly affecting their skin.

She urges people to not be afraid to get in contact with albinos as they are human beings like all
of us.

Clare Demba yens the government to come to the aids of the people with Albinism in helping
them access higher education in achieving their desired goals.

Sheikh Tijan Secka University student suggested the Government to build schools for the Albinos with good air conditioner to help them learn comfortable and pursuit their dreams.