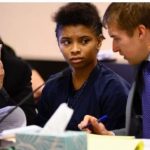 A Wisconsin teenager charged of killing her alleged sex trafficker was released from jail Monday on $400,000, according to the organization that paid for her jail release.

Chrystul Kizer, 19, had been jailed close two years since being charged in connection with the June 2018 death of Randall P. Volar III, according to the Chicago Community Bond Fund.

“We are elated to know Chrystul will no longer be locked in a cage simply for wanting to live,” the bond fund said in a statement. “No one should be incarcerated for surviving violence against them.”

Kizer, who is Black, was allegedly trafficked by Volar, who was White, beginning when she was 16 years old, the bond fund said.

Kizer maintains that Volar’s death was the result of self-defense, the fund said.

“Far too often, survivors of violence — especially Black women and girls — are punished for defending themselves,” the statement said. “Chrystul’s case highlights the urgent need for the criminal legal system to stop prosecuting survivors of domestic violence and sexual assault.”

Her original $1 million bond was curtail to $400,000 in February, according to court records. Her bond was signed Monday and posted Tuesday.

When Kizer’s case ends, the bond money will be used to establish a national fund for survivors of domestic and sexual violence facing charges, the statement said.