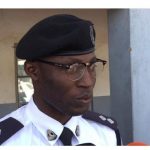 According to Standard, police in the Central River Region have taken into custody 11 people at Sami Karantaba Tenda,including 2 DJs from Sare Sambel for having a music show in the villages against Public Health Regulations 2020.

Standard make known of a police statement that the men were arrested after they staged a music show and gathered children to for a “Salibo Music Show”.

This is the second time police have arrested people organizing music shows in this emergency situation.

Meanwhile,the Mobile Traffic department has also arraigned seven drivers at the Kanifing Magistrates’ Court for carrying passengers without facemasks. They were fined D1000 each.

The police have also confirmed the arrest of three individuals including a motorcyclist in Serekunda for failing to follow the compulsory facemask wearing regulation.