Russian President Vladimir Putin to extend his rule until 2036 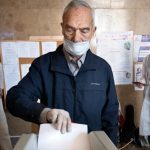