Tens Of Thousands Protest In Mali 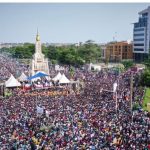