As U.S. Schools Move to Reopen Despite Covid-19, Teachers Threaten to Strike 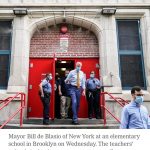 It is clear to Afrinity Production that Educators and families around the United States continued to grapple this week with the complicated realities of opening schools in the middle of a pandemic, as teachers’ unions threatened strikes, colleges rethought reopening plans on the fly, and school districts, discovering new cases, improvised quarantines and classroom cleanings.

The voice of teachers in the reopening debate took center stage Wednesday in Michigan, where the Detroit Federation of Teachers voted to authorize their executive committee to call for a strike over plans to open public schools for in-person learning.

“It’s just simply not safe for us to return into our buildings and classrooms right now,” the union said in a video statement before the vote, noting more than 1,400 virus-related deaths in the community.

New York City’s powerful teachers’ union sought to ramp up pressure on the mayor on Wednesday to delay or call off his plan to reopen the city’s 1,800 schools on Sept. 10. The president of the United Federation of Teachers threatened to sue the city or to support a strike if the city could not satisfy a list of safety demands, and called for all students and staff members to be tested before school starts.

Public sector employees are legally barred from striking in New York, but teachers have threatened to hold sickouts if they believe school buildings are not safe.

College-bound students were thrown a curve ball Wednesday when the College Board said that more than 178,000 students who signed up to take the SAT college admission test on Aug. 29 would probably not be able to do so because nearly half the testing sites in the nation are closed or operating at limited capacity. All told, some 402,000 students were scheduled to take the test that day.