US Ambassador to UK 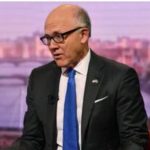