Trump rushes out of the news conference after a shot 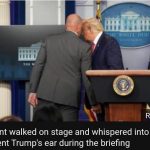 US President Donald Trump was rushed out of a news conference after Secret Service agents shot and wounded a man who is alleged to be armed outside the White House.

According to BBC, the Secret Service said the occurrence took place one block from the compound, when an officer fired on the suspect who had run “aggressively” towards him.

An agent then walked on stage as Mr Trump was speaking and led him away.

The president returned minutes later to say the situation was taken cared of.

The US Secret Service said the incident happened on Monday on the corner of 17th Street and Pennsylvania Ave – outside the White House perimeter.

The Secret Service did not say whether the man was armed. It added that “both the officer and the suspect were then taken to hospital”, and that “at no time during this incident was the White House complex breached”.

When the president returned nine minutes later, he said: “Law enforcement shot someone, it seems to be the suspect.”

He said he did not know if the person harboured any ill intentions towards him.

“It might not have had anything to do with me,” Trump clearly stated.