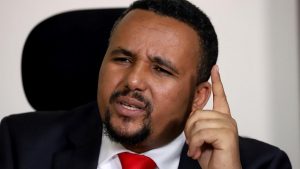 Security forces in Ethiopia’s Oromo state on Wednesday clashed with supporters of popular activist, Jawar Mohammed, who earlier claimed an assassination plot against him.

Jawar, who was a popular figure in the anti-government protests that are widely credited to have forced the ruling coalition to reform, claimed there were attempts to remove his security detail on Tuesday night.

‘‘The plan was to remove my security and unleash civilian attackers and claim it was a mob attack. There has been strange mob type conflict in the city in the last few days including one not far from where I live just about an hour before they tried to remove security from my house,’‘ Jawar said in a message posted on his Facebook page.

The plan was to remove my security and unleash civilian attackers and claim it was a mob attack.

Jawar, who runs the Oromo Media Network (OMN) was one of the activists and political leaders who were security by the government, following his return from exile.

Local news portal Addis Standard said the Federal Police Commission Commander Endeshaw Tasew, confimred that some of this security detail is being withdrawn from private citizens based on low threat and increased stability evaluations.

The tensions between Jawar and the federal government can be traced to remarks by the prime minister, Abiy Ahmed who on Tuesday warned of forthcoming tough measures against media organisations ‘fuelling conflict’.

“If [you] become a threat against Ethiopia’s peace and survival, whether or not you speak Amharic or Afaan Oromoo, it should be noted that we will take the necessary measures,” Abiy told parliamentarians.

Abiy continued to say ‘‘we do not have another country to flee to. Those of you with [a second] country, if you are willing to help us with our peace, development and democracy then you are welcome”.

These remarks were interpreted by many, including Jawar, as an attack on himself and his organisation. Jawar later explained to his 1.7 million followers on Facebook that he only acquired a foreign passport ‘beacuse the government would not renew the one he had’.

The popular activist has repeatedly dismissed allegations that he intends to run for political office, but is increasingly seen to be working towards a showdown with Abiy, the country’s first prime minister from the Oromo ethnic group.