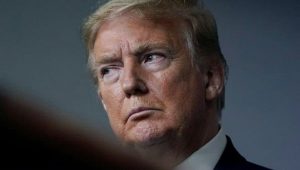 President Donald Trump attested Sunday that the US intelligence community “did NOT bring up the CoronaVirus subject matter until late into January” and that “they only spoke of the Virus in a very non-threatening, or matter of fact, manner.”

CNN and other news outlets have reported that the President’s daily intelligence orientation included information about the coronavirus escalation in China and its potential to escalate to the United States as early as January 3.

It is not plain whether Trump — who infrequently reads the President’s Daily Brief put together by intelligence officials — read the information at the time or whether officials orientating the President in person brings out the issue.

The Washington Post also reported last week that US intelligence agencies put forward warnings about the coronavirus in more than a gigantic classified orientations made for the President in January and February.

Trump said Sunday night that he was first oriented about coronavirus on January 23 and affirmed the US intelligence agencies would be bringing forward a statement in the coming days.

Posted in Featured News | Comments Off on Trump attests intelligence officials did not alert him of coronavirus until late January
Tags: Corona virus, Donald Trump, US News