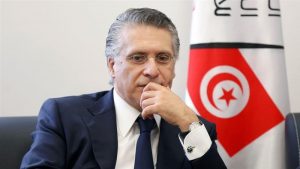 A Tunisian court has turned down a request to release jailed media mogul Nabil Karoui, who, along with academic Kais Saied, has advanced to a runoff in Tunisia’s presidential election.

Karoui, who was arrested in August on money laundering and tax evasion charges, finished second behind Saied in Sunday’s election.

“The judge has refused to give a ruling, saying it was not in his jurisdiction,” lawyer Kamel Ben Messoud said on Wednesday, after requesting his release the previous day.