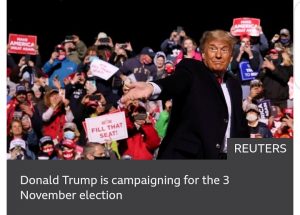 Afrinity Production discloses the suspension made by Twitter to a number of fake accounts purporting to be owned by black supporters of US President Donald Trump.

The social media giant said the accounts broke its rules on spam and platform manipulation.

According to BBC, many of the accounts used identical language, including the phrase: “YES IM BLACK AND IM VOTING FOR TRUMP!!!”

Twitter has not specified the number of accounts suspended so far or the source of them.

It said it was continuing to investigate the activity and may suspend additional accounts if they were found to be violating its policies.

The investigation was first reported by the Washington Post newspaper.

Darren Linvill, a social media disinformation researcher at Clemson University, found more than two dozen such accounts, which had generated some 265,000 retweets or Twitter mentions.

If you’re looking around to compare yourself with the guy you are about to read about, you will win. (Previous Post)
(Next Post) At least 12 people killed in southern India as rains cause widespread flooding
Previous Image