UK at ‘critical point’ in pandemic, top scientists to warn 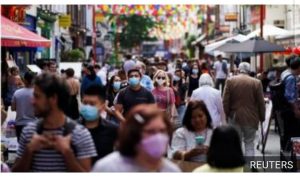 Afrinity Production disclose to you of how UK is at a “critical point” in the coronavirus pandemic and “heading in the wrong direction”, according to Reuters.

Prof Chris Whitty believes the country is facing a “very challenging winter period” and will hold a televised briefing at 11:00 BST.

It comes after the prime minister spent the weekend considering whether to introduce further measures in England.

On Sunday, a further 3,899 daily cases and 18 deaths were reported in the UK.

The prime minister is understood to be considering a two-week mini lockdown in England – being referred to as a “circuit breaker” – in an effort to stem widespread growth of the virus.

He held a meeting at Downing Street on Sunday, along with Prof Whitty, Chancellor Rishi Sunak and Health Secretary Matt Hancock, to discuss possible measures.

Asked about reports of disagreements among cabinet ministers about whether or not to impose a second lockdown, Transport Secretary Grant Shapps told BBC Breakfast: “A conversation, a debate, is quite proper and that is exactly what you’d expect.

“Everyone recognises there is a tension between… the virus and the measures we need to take, and the economy and ensuring people’s livelihoods are protected.”

He added it was “very clear when you follow the data” that the UK is “at this tipping point where we may need to go further”.

Posted in Featured News | Comments Off on UK at ‘critical point’ in pandemic, top scientists to warn