US election 2020: What young Democrats think of Joe Biden 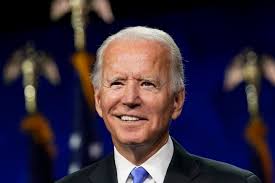 Afrinity Production unveil to you of what young American Democrats think of Joe Biden.

As we all know, Joe Biden is about to be crowned as the Democrats’ presidential nominee – but what do young millennials and Generation Z voters who support the party think of their candidate?

At the age of 77, the former vice-president is half a century older than the dozen voters we spoke to – yet it’s his moderate politics rather than the age gap which has many struggling to get excited.

Some said he is the best option Americans have. Others say he is an incredible being, a listener, moderate leader , a liberal in an image of immoderate.

Others say, the one person to restore equality and transparency in America.

Posted in Featured News | Comments Off on US election 2020: What young Democrats think of Joe Biden