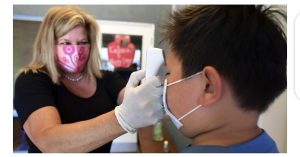 Afrinity Production make known to you the United State’s drastic increasing in the pandemic, surpassing 200,000 deaths on Wednesday from the coronavirus, is indeed a record-breaking wave of new infections which forces authorities in Europe to reimpose lockdown restrictions.

The world’s most powerful nation hit the figure just 41 days before a presidential election, and as the World Health Organization warned that new cases worldwide have risen to record highs.

US President Donald Trump — who faces a tough re-election fight and is trailing Democrat Joe Biden in the polls — said the 200,000 milestone was “a shame” and deflected blame onto China.

Trump used a video address to the annual United Nations General Assembly to attack Beijing for not stopping the spread of what he called the “China virus.”

“We must hold accountable the nation which unleashed this plague onto the world — China,” he told the UN’s diplomatic showcase event, which is being held almost entirely online because of the pandemic.

Trump has repeatedly played down the seriousness of the coronavirus crisis, even as the United States has suffered one of the world’s highest death tolls.

According to an AFP tally, worldwide more than 31 million people have been infected and nearly 962,000 have died from Covid-19 since the virus emerged in the eastern Chinese city of Wuhan in late 2019.

The World Health Organization reported late Monday that almost two million infections were recorded around the globe in the single week to September 20.

Posted in Featured News | Comments Off on US Passes 200,000 COVID-19 Deaths As Spread Quickens Globally