We take action within the law – Gambia Minister of Finance 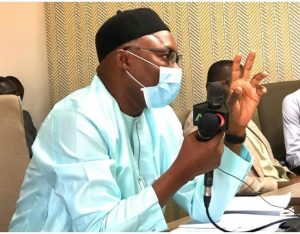 The minister of Finance and Economic Affairs, Hon. Mamburay Njie has stand firm on the decision of his ministry to secure food support for the poor and helpless Gambians across the country by bringing forward funds from the budgets allocations of the various government ministries, agencies, and departments.

The minister made a strong stand for the government’s Marshall of the emergency COVID-19 health fund and food supply fund of D500 million and D734 million, simultaneously, on Wednesday at the Finance and Public Accounts Committee of the National Assembly (FPAC), which brought concern that parliament was not involved in the process.

“We did not act outside the budget approved by the National Assembly’’, Minister Njie said, explaining that the COVID-19 monies were raised from 2020 budget allocation in line with the existing public finance regulations of the country.

“If we would have gone more what was approved, yes…But up to today, we have not spent anything that is beyond what was appropriated by the National Assembly in December 2019. We were guided by the Public Finance Act 2014, which allows for virement’’.

*The minister added that a significant percentage of the D500 million was cut from the travel allocations of the government because global travel has been restricted due to the COVID pandemic while the entire D734 million was sourced from savings from the debt service referral from development partners.*

Members of the National Assembly subcommittee, including Hon. Ya-Kumba Jaiteh, Hon. Sedia Jatta, and Hon. Fatoumata Njie have seen that the provisions of the Public Finance Act that the Ministry put hopes on were in contravention with the Constitution and should be properly checked.

He also be firmed that they had to act with all speed to provide food support to Gambians.

Posted in Featured News | Comments Off on We take action within the law – Gambia Minister of Finance
Tags: Gambia Ministry of finance, President Barrow's food bank

UDP Youth president tells Gambian VP Touray ‘Youth must not be used as tools for exploitation.” (Previous Post)
(Next Post) Risk Emerges As Submission With COVID-19 Measures slow up in Gambia
Previous Image